I've recently started to work on a book on (the virtue of) gratitude. One of the questions I intend to address is whether gratitude can actually be owed to someone, and if so, in what kind of situation exactly. 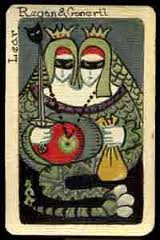 Take for instance the gratitude that a parent expects from their children. Filial ingratitude is one of the great topics of literature. Think of Shakespeare's King Lear, who gives his kingdom and all his power to his two daughters who swear they love him more than anything else in the world. But, predictably, as soon as they have got what they wanted, the erstwhile king becomes a bothersome old fool to them, neglected, abused, and despised. Lear, of course, bitterly complains about their "monstrous" ingratitude, which is seen as almost as bad as patricide, which in turn is seen as very bad indeed. Shakespeare suggests that what makes Regan and Goneril's ingratitude so abominable is not the fact that they are not properly grateful to Lear in his role as a benefactor (who has given them power and riches), but rather that they are not properly grateful to him as their father. Similarly, in Balzac's Pere Goriot, the title character is a once wealthy man who has literally given his last penny to his rich and spoilt daughters, who then cannot be bothered to visit him when he is dying and has only one wish, to see them one last time. He is buried like a pauper, his daughters nowhere to be seen. So this seems to be another clear case of filial ingratitude. But then again, it is the great sacrifices that Goriot makes for his daughters that prompt the reader to think of their ingratitude as monstrous. Would they appear any less monstrous if Goriot had not been their father? Perhaps, but why exactly? Is there a gratitude that they owe to their father for the simple reason that he is their father?

So the question is, do we owe our parents gratitude because we owe our existence to them? After all, we wouldn't be if not for them. However, even if we value our being alive, we didn't exactly ask anyone to give us life, and it is not clear that our parents have actually benefited us by bringing us into existence. You can benefit someone who exists, but not someone who doesn't exist. But if my existence as such is not something that I owe my parents gratitude for, perhaps I owe them gratitude for feeding me, providing a roof over my head, and not letting me die when I was too little to fend for myself. However, it may be argued that by bringing us into existence they have incurred a moral obligation to look after us until we no longer need them. It is they who owe us, rather than we who owe them (just as we owe our children, rather than they us). It all depends whether we think that children have a right to be fed and taken care off and even (as some philosophers have argued) to be loved. If there is such a right, then they don't owe gratitude to those who do nothing more than what is their moral duty.

So again, is there such a thing as filial ingratitude?
Posted by Michael Hauskeller at 01:15 No comments:

I just reread Gabriel Garcia Marquez' One Hundred Years of Solitude, which I read first 25 years ago, when I was a student. Great book, but not exactly uplifting when we take the events in the book, which tells the story of seven generations of the Buendia family somwhere in South America, to be a description of the human condition. There seems to be little room for human choice, with every single character firmly in the grips of fate, repeating the same mistakes that their ancestors have made, engaging in the same follies, driven by instincts rooted in a common family character, as if the family were a Schopenhauerian idea, and its members only so many appearances of that idea, somehow lost in the material world, the world of becoming, as if they already were the ghosts as which many of them return after their death. 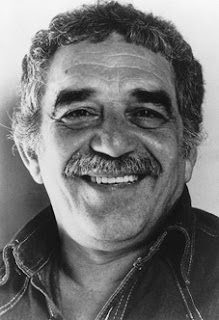 Not very surprisingly, given the title, the main theme or even main protagonist of the book is solitude, which is mentioned over and over again in various contexts and attributed to virtually all characters in the book. One of them, Fernanda, who marries into the family as a young woman and who initially is strong and independent, eventually finds herself worn down, not by life, but by the memory of her lost youth and everything that could have been and never was. And then Marquez or his narrator says a remarkable thing: "The need to feel sad was becoming a vice as the years eroded her. She became human in her solitude." How depressing is that! To suggest that what makes us human is not our reason, or our indeterminacy, or our moral sense, or the knowledge of our mortality, or any of the other traditional definitions of the human, but the existential condition of solitude. It suggests that we are always essentially alone, even when we're with others, even when we love and are being loved. That we were born alone and that we will die alone. And that we are deluding ourselves if we think that there is ever a time when we are not.

There is, of course, some truth in that. On the other hand, our human solitude is rooted in our apartness, our natural detachment from the world, which goes along with self-awareness, and it seems to me that the same detachment also allows us to love and befriend others, to feel compassion for and solidarity with them, to empathise. By virtue of our solitude we recognize each other for what we are. And perhaps it is that recognition that gives rise to what we call human dignity.
Posted by Michael Hauskeller at 00:07 1 comment:

Philosophy and the Meaning of Life 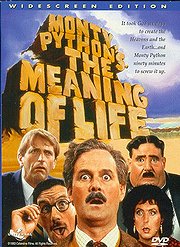 I've been listening again to a radio interview I did some years ago. It was one of those programmes where listeners could ask questions. One of the questions was what I thought the meaning of life was. My reaction was to laugh and then to say that I was sorry, but that I couldn't answer this question because it was "too big" for me. I think I was rather amused by the public's persistent belief that what philosophers do is think about the meaning of life. Because that is, of course, not at all what we do. Now, however, listening to that broadcast again, I suddenly felt slightly ashamed of myself and actually of my whole profession. Why shouldn't people expect a philosopher to think about the meaning of life and to have, as a result, some, however tentative, answer to the question? This is, after all, why most of us start to ask philosophical questions in the first place, isn't it? It is the question that is at the heart of the whole philosophical enterprise. How odd then that professional philosophers shy away from this question and tend to make fun of people who ask it. It is a kind of intellectual cowardice, as if we had given up hope that this crucial question could ever be answered, or we were afraid of the kind of answer that we might find if we only looked hard enough. So it seems to me now that we shouldn't try to avoid this question, but on the contrary tackle it directly and do our best to find an answer. What does it all mean? I have no idea, but I'm determined to find out.
Posted by Michael Hauskeller at 01:54 6 comments:

A new animal research facility was opened last Friday at the University of Leicester, UK. On Saturday, the left-wing British newspaper "The Guardian" printed a comment by Fiona Fox, the director of the Science Media Centre and, bizarrely, a former leading member of the Revolutionary Communist Party. The article was titled "Brave, not cruel, science". In it, Fox reminisces about the bad old days, only a decade ago, when animal researchers were demonized and openly attacked for torturing and killing animals in the name of science and human interest. The opening of Leicester's new research facility is a good sign, though. It gives hope that things are finally changing for the better. For too long, Fox feels, scientists have let themselves be so intimidated by animal rights activists and an all too gullible public that they didn't dare to pursue their work openly and to state the obvious, namely that animal research is absolutely necessary and a wonderful thing really. Scientists should be proud of what they are doing because they fight the terrible diseases that haunt humankind. Brave they are and honourable, modern heroes, knights in shining armour, and not cruel at all: "I know many scientists who work on animals. They are not motivated by cruelty but by a powerful desire to push the frontiers of medical research and develop therapies for debilitating diseases. Each one of these scientists is proud of the work they do and, like Leicester University yesterday, they are starting to show that pride to the world." 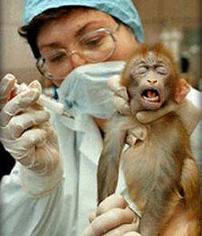 Now, I'm sure that most scientists who use and kill animals for their research are honourable people, and not, by nature, cruel. But that doesn't mean that their actions are not cruel or morally beyond suspicion. People can do very cruel things without being motivated by cruelty. It is well known that many Nazis who committed atrocities or allowed them to happen were not motivated by cruelty, but rather by a twisted sense of duty. Nazi scientists also used and expended lives in the name of science and progress. In their case those lives happened to be those of fellow humans. Some of the results of that research have actually proven valuable and may even have saved lives. But that doesn't mean that the research was morally justified, and that those scientists were "brave" and that they ought to have been proud of what they were doing, although I'm sure that many of them were.

My point is not that torturing humans to death in the name of science and the greater good is not worse than torturing animals to death for the same reasons. Perhaps it is, and perhaps it isn't. My point is rather that the motivation of the researchers is beside the question. Nor is it relevant whether the ends that are being pursued are worth pursuing or not, unless we are convinced that certain ends justify any means that we might have to use to secure those ends. It is not enough to be convinced that those scientists are good people and that they want only the best for us. We still need to ask whether what they are doing is right, whether we are justified in letting certain things be done to animals, no matter for what reason.
Posted by Michael Hauskeller at 04:57 No comments: