Earlier this week I attended a workshop where someone gave a talk about early animated films. The talk also included a reference to the so-called "Uncanny Valley" hypothesis. Since I had never heard of it before, I had to look it up, which is odd given that the hypothesis has been around for more than forty years now. In 1970 the Japanese roboticist Masahiro Moti published a paper, in which he suggested that our positive feelings towards a robot steadily increase the more human its appearance becomes, until, that is, we reach a point where the robot looks almost human, but not quite. Then sympathy quickly turns into revulsion, that is, the sympathy curve that up to this point had steadily risen falls suddenly below zero, before it rises again with equal suddenness when the robot becomes indistinguishable from a human. The term "uncanny valley" refers to the sudden dip in the sympathy curve. In 2007, Jamais Cascio speculated that we might experience a "second uncanny valley" once we have started to radically enhance human beings. The slightly more than human might be as uncanny as the slightly less than human, while we might be fine with sufficiently distant posthumans. 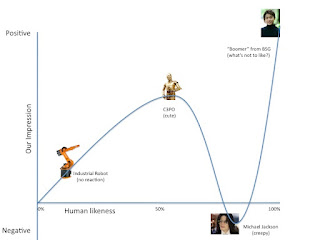 So if that is correct, then what exactly is it that provokes such a negative reaction to the almost-but-not-quite-human and the no-longer-quite-human? And which entities, aside from robots, are we talking about? The Wikipedia entry on the uncanny valley shows a graph which positions zombies and corpses in the uncanny valley. But I find this not very convincing. Surely zombies and corpses are not uncanny because they so closely resemble real (i.e. living) humans, but because they are dead, and they are rotting, and some of them want to eat you. Perhaps better examples would be the animal people in H.G. Wells's The Island of Dr. Moreau, which the narrator Prendick, when he first encounters one of them, mistakes for human, though he feels that there's something odd about them that disturbs him. Or think of the aliens in Don Siegel's 1956 film "Invasion of the Body Snatchers", which look quite human, except that all human emotion seems to have drained out of them, and they, too, come across as creepier than any monster could be. What is it that repulses us here? Is it the transition from the non-human to the human or from the human to the non-human? Is it the ambiguity? Lower down on the rising curve, before the sudden dip into the uncanny valley, we know that the entity is not human, and its efforts to look more human are seen as a kind of hommage paid to humanity. No ambiguity here. But an entity that looks almost human, but not quite, without being human, is like a pretender to the throne. An usurper. Perhaps it also reminds us of the fragility of humanness, which sometimes appears like a thin veneer rather than a deep-reaching and solid identity. It is also interesting that, if the hypothesis is correct, then an entity that, in its appearance, cannot be distinguished from a human, does no longer disturb us, even if we know that it is not human! Why should that be? Does it perhaps have something to do with the fact that we cannot think of someone who in its outward appearance (including the way it moves and acts) is really indistinguishable from a human, as anything other than human? Perhaps that is what we are for each other: animated bodies with a particular, characteristically human appearance.
Posted by Michael Hauskeller at 00:39